After a cold and wet October, at last a fabulous Indian summer weekend. Sunny and warm both Saturday and Sunday, with less wind on Sunday. I abandoned my plans to spend most of the weekend at my computer and enjoyed the great weather.

Saturday turned into a grand tour of west suburban Chicago. I attended the west suburban networking breakfast of Chicago Women in Publishing for the first time. There were only five of us, but we had a good discussion about using social media for business. Then from Naperville to Winfield (walked in a park) to Glen Ellyn (grocery shopping at Trader Joe’s) to Elmhurst (shopped for tea, visited the library, and walked around downtown) to Hinsdale (dinner and more grocery shopping).

Sunday was a stay-at-home day, with lots of cooking and gardening. I trimmed the irises back and cut down two large bags of saplings that were encroaching on my perennial bed. Still lots more to trim; that could be a full-time job, as could picking up sticks. The next two weeks are supposed to be warmer than average, so I left the chard, arugula, and container lettuce for another day.

I made roasted pumpkin-apple soup from the Dec. 2009 issue of Eating Well. That’s for Souper Monday at work. From November through March, volunteers bring soup on one Monday during the month. I also mixed the dough for Pumpkin Pie Brioche from the new book Healthy Bread in Five Minutes a Day. The dough smells great, but I didn’t bake it yet, as it needs to chill for several hours. Warning–if you try this recipe, use a big container to store the dough. My first choice wasn’t large enough, and I had a dough explosion! Fortunately, I checked before it completely overran the bowl.

If your garden’s producing more than mine and you have too much zucchini, check out Linda Ligon’s zucchini spindle.

Cooking Ahead for the Week

Cooking ahead again, since this week will be busy:

The garden still isn’t producing much, but I did pick a few more tomatoes. I also weeded and planted a wild lettuce mix in the planter in hopes of getting some fall lettuce.

Picked the first tomatoes of the season today, just about when I usually do, despite the cool summer that we’ve had. Three Sweet Hearts grape tomatoes, and two Orange Paruche cherry tomatoes.

I also picked some arugula. The beans and peppers are in flower, and there’s one eggplant.

I’ve been experimenting with raw foods recently. The Complete Idiot’s Guide to Eating Raw has been a good introduction. It covers ingredients, tools, techniques. Its recipes, though fewer than many cookbooks, sounded interesting. This weekend I tried and enjoyed several:

I also made my favorite carrot salad: shredded raw carrots, chopped parsley, lemon juice, a little olive oil, and salt. This is good right away, but better after it’s been refrigerated for a few hours or overnight. Makes a tasty sandwich with some natural peanut butter and whole wheat bread.

If you’re interested in raw foods and live in the Chicago area, try Borrowed Earth Cafe in Downers Grove. Steve Pavlina also has a series of posts about his 30-day raw food trial. 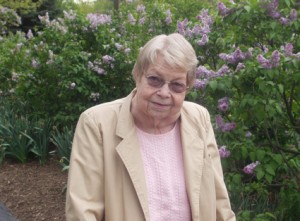 Remembering my mother, Marion Plass, on this Mother’s Day with lilacs in bloom. She always appreciated them so much when I brought her a bouquet.

A lovely day after a Saturday windstorm, but I didn’t get out in the garden until late afternoon. Still, I was able to lay some boards down and to plant sugar snap peas, romaine lettuce (De Morges Braun), and more Amethyst radishes. The pac choi, arugula, lettuce mix, and radishes planted last week are all up.

The windstorm on May 9 took its toll. More vanes were ripped off the decorative windmill, leaving it with only three! A large branch fell from the Chinese chestnut tree, narrowly missing the grapevines, which are now partially leafed out.

At last, a beautiful spring weekend after a long, cold, wet spring. I cleaned up the flower beds and herb garden, picked up sticks from the lawn, and sowed a few seeds:

In bloom: bleeding heart, daffodils, and tulips. The lilac is just starting to bloom, and the allium are in bud.

The grapevines are starting to leaf out; their unfurling leaves are a lovely pink with green undertones.

File and find anything fast with Paper Tiger Online!